The dark side of the internet 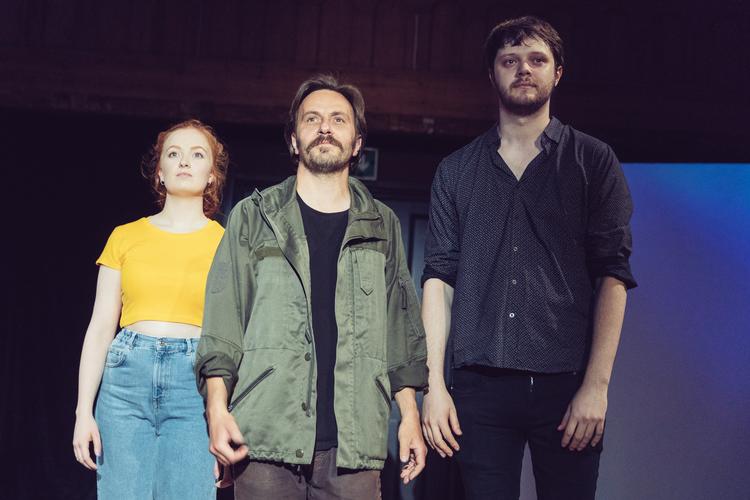 Holy Land is a play about the power of the internet and the realms of the dark web. The story plays with timelines and series of events; three characters take turns on the scene to tell a bit of their stories, in a non-chronological way. They don't interact, and they won't until the very end of the play, when their identity and connection become fully clear. Kate (Hannah Morrison) talks about her rebellious life in a small community - Isle of Mann, "as interesting as a cup of tea". Jon (Rick Romero) appears to be a distressed, confused man, trying to put together the pieces of his life and coping with a frustrating marriage. Tim (Matthew Gouldesbrough, also the writer) is a witty, loud (often too loud with no apparent reason) young man who slowly unravels stories of bullying and difficult upbringing, from a "rough" background - a term that he finds a lot more compelling than 'poor'.

The set is quite bare, but makes a clever use of projectors and screens as a window into the internet world. Initially, it's quite unclear who the characters are, and what is going on. Eventually, the pieces of the puzzle come together, and the plot starts making sense.

The story is meant to be about the dark web, the 95% of the internet content that we don't really see or experience. And the message is that the deep web works very much like the internet we know, the internet of YouTube and Facebook. The story fails though to really explore in depth the complexity of the dark web and its mysterious players. We see Jon buying a gun, Kate exposing her sexuality, and Tim being at the same time a victim and a perpetrator of uploading abusive videos. The whole plot turns out to be much more about a dysfunctional family, bullying, abuse and mental health, which evolve into a series of tragic events. The topics are all very current, but the internet ends up being a relatively minor element of the narration. Hannah Morrison delivers probably the best performance, balancing her naivety and desperate rebellion of her youth in a credible way. Overall, the play demonstrates potential, but hardly produces in the spectator the feeling of having been exposed to much more than what we already see in the daily news about the negative effects that social media can have on our lives.

It runs until 15 June