A raw Richard II, from The Vaults of the Quandary Collective 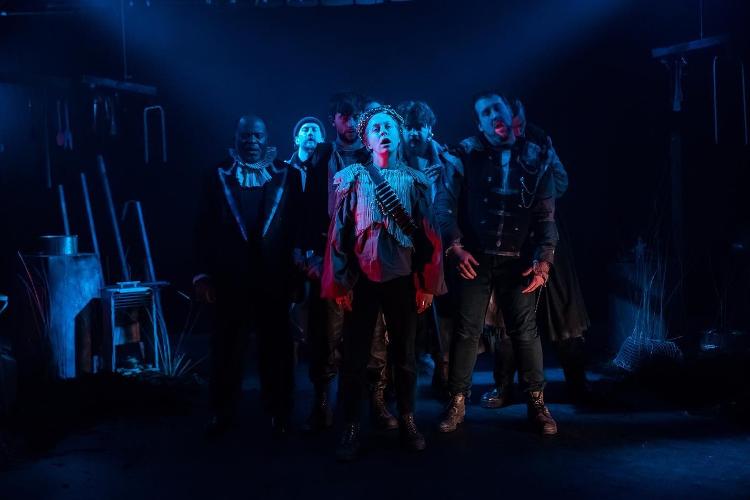 I’m back in London inhaling a mass of cultural endeavours, with energy levels dipping. I am always hungry to seek out venues I’ve never been to in the capital.
Arriving late to Richard II, I was already annoyed as there was no clear labelling that The Vaults has two separate venues, so myself and a friend in the rain pounded over their theatre. It took a while to break down the show: the heightened dance numbers, the jolting violence, a rugged nature of the whole thing. The Vaults Theatre made for a chilly, moody presence, the ambience of the passing trains above completing the unflinching battle drama around us.

Traditional elements mingle with the gothic, here in Annie McKenzie’s production. You can feel the time has been spent with the actors juicing every drop out of Shakespeare’s poetry, a variety of English accents also added to the pot. I must have been the only Welshman in the audience, as Wales and the wars get brought up here and there.

In a gender swapping turn, Coco Maertens is King Richard II. Coco is compelling in the role, her subtle, nuances wage war with the furies and drama, in one scene going completely naked around the set. This is a fine take on changing of genders. George Alexander as Henry Bolingbroke (later Henry IV) is the undercurrent of menace, his feud leading to a total rebellion in another decent performance. Joseph Quartson as both John of Gaunt/Bishop of Carlisle also has some good handling of the verse, even if he almost fell off a stand at one point. A strong ensemble bring force to a lesser known History play, one that needs more attention. I’m still thinking of the beach scene now and the image of the crown, as if “two wells”.
It’s a good use of the space, the score and lighting also noteworthy. It does have a little way to go (this was opening night ) and a 7 pm start time should be a must, even with being moments away from Waterloo. Don’t get lost and dress up warm. You won’t regret it.