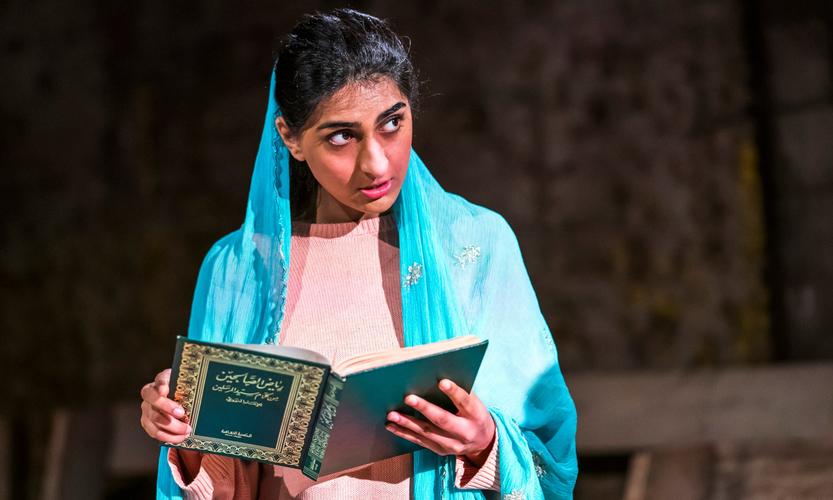 The Vaults at London’s Waterloo is the perfect location for the much heralded Salaam.  A three hander that is intent on breaking down the Islamophobe barriers that are so very prevalent in today’s current climate.  It is an hour long piece and hits (at times a little too hard) with facts. Much should be made of the director’s note – this is not an easy subject to dive into with such  limited time in which to do so.

The staging is simplistic; we have the Qu’ran on the floor, surrounded by (as it becomes apparent later) streams of automatic writing from God. So salient that Stormzy himself has retweeted them. A few moments later, a pig’s head is taking centre stage.

Reema and her mum are entering the holy month of Ramadan.  A new start, “I fast so that I am clean inside, I feel like I have been given another chance”.  Salaam is beautifully poetic and the constant narrative that mutters beneath the eyelids of Reema is at best, confusing and at worst, it leaves the audience in a stage of bewilderment.  Ellie is the friend who is wonderful at implying, implying what however, I am still not quite sure.

The piece is fast paced which is required but doesn’t have enough integrity within the constraints to fully expand on the dialect. Nonetheless, Salaam is a charming piece of work, it is a shame that there wasn’t enough time to explore it further.