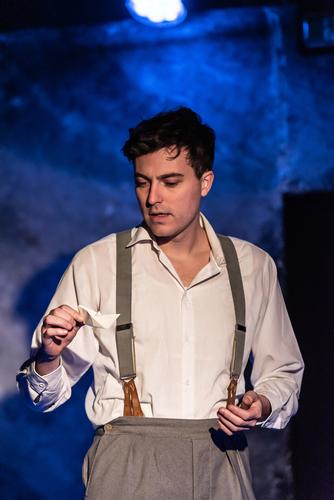 A remote Island in the Outer Hebrides, 40 miles from the nearest inhabited land.  Two Ornithologists on a mission from 'The Ministry' to study the Bird population on this Outlying Island. The Island's Owner and his Niece are the only other inhabitants, accompanying the Ornithologists on their month-long excursion. It is the eve of World War II. Mixed together, you are creating a recipe for success in David Greig's Outlying Islands presented by Atticist. While this play started on its path to success, somewhere it took a sharp turn for the worse.

The initial introductions to the complex characters gave an audience a close view into the lives of these four people thrust together by chance. Even up until the end of Act One, the characterization of all showed promise the second half, with drastic events adding a great twist into the mix.

However, the second act showed large unjustified characterization changes in not only a short amount of time for the audience, but also over a very short space of time for the story. The entire story was flipped on its head with very little to continue the links through. The problem with this is that it is by no fault of the actors or directors of the piece.

The 4 players were fantastic. Ken Drury as Kirk and Jack McMillan as John created incredibly rounded characters, despite the flaws in the material. They brought life to their characters. Alongside them, stood Rose Wardlaw and Tom Machell as Ellen, the introvert Niece, and Robert, the extrovert Ornithologist. These characters were flawless and believable.

Even the staging of the piece was fantastic. The use of the space was brilliant, giving the audience the perspective of being a fly on the wall. Jessica Lazar's interpretation of this play was interesting viewing and darkly funny at the beginning.

It seems a shame for this fantastic company despite their obvious talent and accomplished creation to be let down purely by the rushed writing towards the end of the piece.