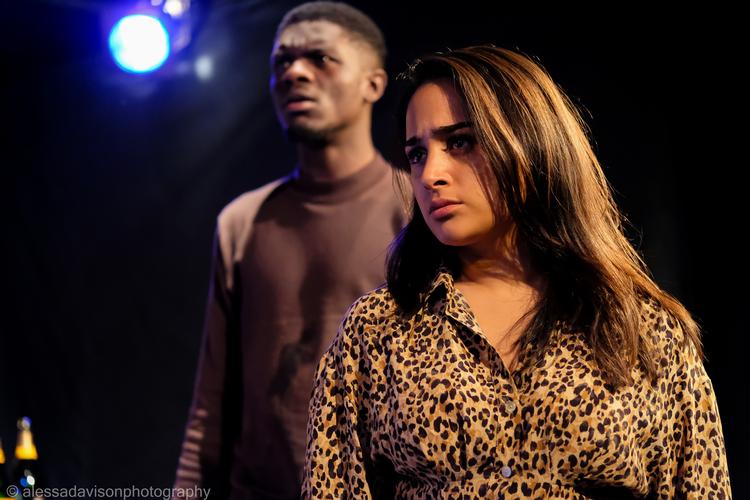 Bouije is the first play of a new company called Unshaded Arts, created by  Cristal Cole, Chiedza Rwodzi and Hassan Govia.
Hassan plays Devin, who invites his friends Courtney (Peter Silva), Joslyn (Maria Yarjah) and Dahlia (Natali Servant) for a night of drinks in his new flat. But the night will not go as he had planned, and the appearance of his neighbour Giles (Freddy Gaffney) and Devin’s sister Giselle (Cristal Cole) will not make things better. There is a secret, or just something not said, behind this new beautiful flat, that will change the trust's balance between friends.

Bouije it is a play of words. The conversations are the main structure of the play, and through them we get to know better almost every character, because all of them have enough space to talk and show their personality.

Many are the topics touched during the night of drinks: race, work, politics, money, friendship, Brexit and much more. Dahlia is the NHS nurse who believes in her job, even if it is not well paid, it is tiring and gives her stress and anxiety, with patients more keen to write a complaint than saying thank you. Courtney has left (or lost) his job, his parents are divorcing and he struggles to pay the rent, so he would like Devin to help him to start his own activity.

All the discussions are pertinent, current and real. It is just that the play is very wordy and sometimes it is easy to lose focus in this river of words that goes on much more than it should. And also, the reaction of Devin’s friends when his “secret” comes out it seems disproportionate. Aren’t friends supposed to listen and understand, rather than walk away?

Still, the diverse cast gives a good, believable performance that makes Boujie a humorous and lively play. I am looking forward to seeing what other story Unshaded Arts will show us in the future.