Ready to board to Messina? 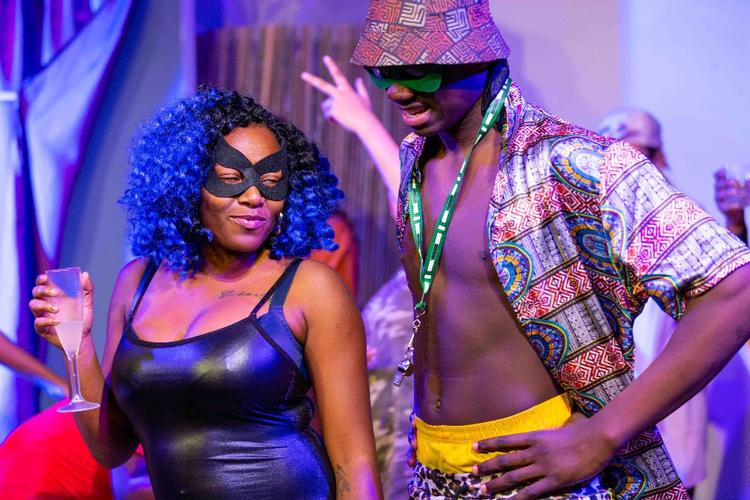 Funny, modern, and refreshing: Intermission Youth Theatre gives birth to a truly enjoyable new play inspired and adapted from Much Ado About Nothing. Shakespeare is not simply revisited in a contemporary note, but embodied by the lively and innovative spirits of the cast members and creative team.

Beatrice affirms her distaste for any man and sort of love bonds. Benedict pledges to live and die as a happy bachelor. With their respective groups of friends, they find themselves together for the same holiday at the same hotel in Messina. During this time, Claudio finally declares his love for Hero and the two are preparing to tie the knot. But DJ, Don Pedro’s sister, is up to impede the marriage. Other love resolutions are also about to change.

With the storyline pretty much untouched, the drama assumes, though, a very different look. First of all, the language adopted is nothing less than brilliant. Even if the risk is for the audience to get a bit lost at the beginning, the London slang fluidly mix and intersect with the sixteenth century rhymes. It’s where ‘thee’ alternate with ‘bruv’ with no friction for the ears. The formula behind this eloquence is the approach to the material and the devising workshops. Led by Artistic Director Darren Raymond, the group of young people has unpacked and reassembled the play, starting from the central themes - still current as when the Bard first wrote them. The reimagining and dealing with the scenes eventually allowed to absorb the lines and include part of the original expressions in a natural way.

The music plays a major role too. Moving from grime to pop, passing by a lot of electronic, the pieces smooth the scenes, together with the simultaneous side acts of cast members dancing while props and backdrops are moved on the main stage.

The culture of social media, selfies, and a pretentious attitude are of course in the script, but as there are friendship, love, and anger. The theatre company has transformed Much Ado in a generational play, but free from stereotyped millennials dumb perceptions. The energy is simply infectious. This is also due to the great enthusiasm and young age of the actors, who, despite being at their first production experience for some of them, proved to be promising budding artists.

A particular mention is due for Jermaine Adeniregun, as Benedick, Ibrahim Konate, as Borachio, and Ilani Marriott-Lodge, as Hero, the ones who probably shine a bit more in this extraordinarily effervescent crowd.

Whether you are curious about a new version of the Shakespearean play or bored of the classic takes of the comedy, Guilt Trip is set to entertain and dazzle as few.

Guilt Trip is at the Intermission Youth Theatre, St Saviour's Church until the 24th November.