Music, dance, video and spoken words in this production at the Old Vic 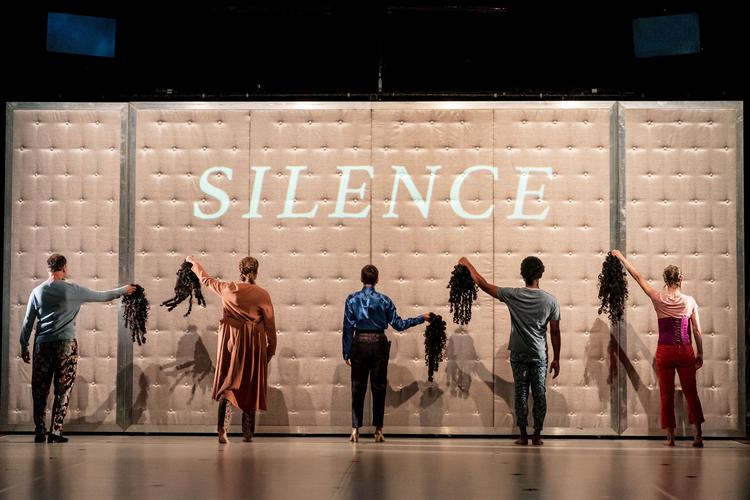 17c by Big Dance Theatre, is being performed as part of Dance Umbrella’s 40th anniversary. This celebration is showcasing many dance-based pieces in and around London and with such breadth of imagination throughout each performance, there is something for everyone.

Big Dance Theatre incorporates dance and narration to tell the story of Samuel Pepys’ diaries which span decades. Of course, he is best known for his Great Fire of London accounts which give us an insight into the terrible events that occurred on those September days in 1666, but the entries we see in 17c show a completely different side to his personality. He wrote down every detail from every day, with information about his afternoons spent looking over his accounts, to his bowel movements – when I say every detail, I mean it.

The company makes an effort to link his 17th century entries to our modern-day obsession with technology, and how it captures even the most boring details of our lives, Big Brother style. The links are slightly forced at times, however, and some of them feel unnecessary.

TV screens around the space, show live recordings of the cast becoming bloggers and recording their videos, chatting about Pepys’ diary. The screens also give us instructions on when to have our eyes closed and open, to allow for set changes. You assume they know the majority of people don’t do as instructed, but the Brechtian style in regards to on-stage character and setting changes are different and enjoyable.

One of the main focuses during the performance is the #metoo movement. Pepys treated women badly, to put it mildly. He burned Bess, his wife’s, diaries and talks very openly about his accounts of raping women. The fact that he was so open about his actions makes you realise how far we have really come. – We have a long way to go, but it’s interesting and important to note how much progress there has been.

After he destroyed his wife’s diaries, her voice was effectively lost, so this piece gives it back to her in the form of dance. But, perhaps there was a missed opportunity and this could have formed a much larger element of the show.

The show starts with a brilliant duet between “Sam” and Bess. The energy and style is beautiful. Other than this, and considering it is part of a dance festival, the show lacks just that… dance.

The costumes and wigs bring a collaboration between the 17th century and modern-day dress which is bright and interesting. The use of colour on the screens, and the backdrop which manoeuvres around the stage to create more intimate, angled spaces is nicely contrasted with the open feel of the non-existent wings. But, Sam’s monologue, where he gives an in-depth description of his feelings for his wife’s maid, is much too long. The whole audience zoned out and the rest of the performance couldn’t quite draw us back.

The cast is undeniably talented, not just as dancers, but as actors too. It’s lovely to see such diversity on stage, even though there are only five cast members. The choreography and direction don’t show off their full potential as performers, however, as more exciting sections are cut short.

Overall, this is definitely not your average trip to the theatre. It’s an unusual, visual piece of theatre and at its best, is remarkable and engaging. But, at times, it was entirely underwhelming. Timings of each section could be reimagined and casts’ strength could be shone much brighter.