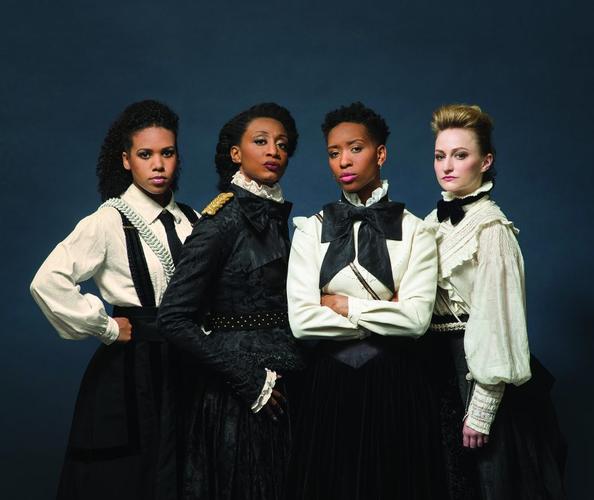 Sylvia is a new funk, soul and hip hop suffragette musical originally commissioned by the Old Vic as a dance theatre piece. Since then, it has evolved into a full musical,  co-written by Kate Prince and Priya Parmar with original music by Josh Cohen and DJ Walde.

Syvia  Pankhurst campaigned for women’s votes with her mother Emmeline and older sister Christabel but later broke up with her family over her Left-wing views. The musical tells her story.

At the performance we attended, the role of Sylvia was played by Maria Omakinwa and the role of Ada by Jaye Marshall. Beverley Knight is Sylvia’s mother, Emmeline; Witney White and Verity Blyth are Christabel and Adela Pankhurst (Sylvia’s sisters).

As you are probably aware, the previews of the show have not been very lucky, due to an unexpected illness of the actress playing Sylvia. Some performances were cancelled and the production had to spend a lot of time to rehearse the understudies.

That said, Sylvia is a very good show. The music touches all the flavours of black music: soul, hip-hop, funk, blues, reggaeton, beautiful ballads.
The cast is outstanding: in addition to Beverley, Mary, Witney and Verity, there are the impressive performance of Delory Atkinson as Winston Churchill, Carly Bawden (Churchill's wife), Tachia Newall, Karl Queensborough, Todd Holdsworth, Ross Sands, Elliotte Williams-N’Dure and the rest of the ensemble.

Sylvia can be easily compared to Hamilton. It is a piece of British history, with a hip-hop and soul score.
Sylvia campaigned for women’s rights and she lost many battles, ended up in prison, before things started to change. So, the pattern of the musical is a bit repetitive and the story never becomes intriguing, and, also, it felt very long (three hours, but this is due to the performance not been revised yet). Luckily, many comic moments and parodies of historical figures provide a comic relief to an otherwise quite politically heavy topic.

Sylvia is a work in progress that looks very promising and with the right adjustments has a potential to pack theatres with young people, attracting them to theatre – just like Hamilton. And with these amazing songs, watch out, Hamilton. Sylvia is coming.