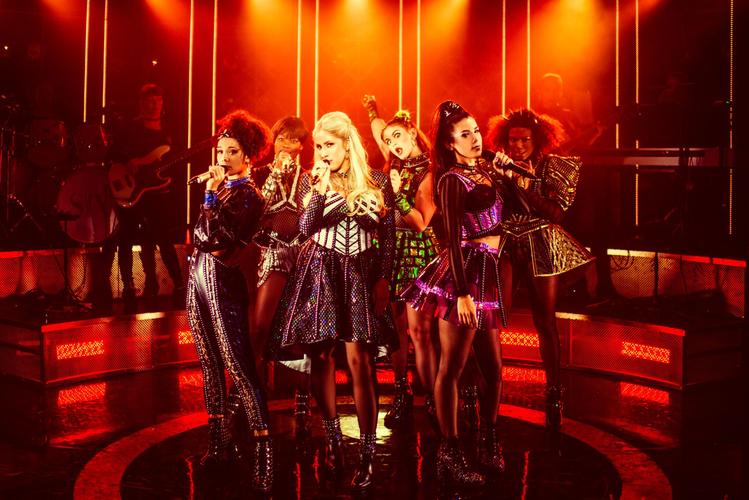 We’re no doubt all familiar with the story of Henry VIII and his many marriages in his quest to have a son, but now thanks to Six, each of his six wives finally get to take to the mic and tell her own story for the very first time.

Written by Toby Marlow and Lucy Moss, Six is a history lesson with a difference. The Tudors meet Horrible Histories with an added splash of The Spice Girls and Little Mix as the six wives come together in this pop concert musical to determine which one of them was dealt the worst hand by their husband. And thankfully you don’t have to be an expert in Tudor history to understand why Six is so special. In this 75-minute spectacular, brilliantly directed by Lucy Moss and Jamie Armitage and packed full of sass and girl power, the audience discovers why each of the queens were “unfriended” by Henry through a range of song styles, from soul to catchy German electro pop. There’s humour aplenty too, with modern references to social media (with Henry disappointed in Anne of Cleves for not looking like her profile picture), a particularly hilarious performance the queen in question and comic rivalry between all six women. “What hurts more than a broken heart?” Jane Seymour asks as she laments her untimely death. “A severed head,” retorts possibly the most famous of Henry’s wives, Anne Boleyn.

The cast are all equally talented and with slick choreography by Carrie-Anne Ingrouille and Gabriella Slade’s regal, sparkly costumes fit for a queen, it’s clear that these women mean business. Each queen excels in her individual performance, but it’s when they all come together that the magic really happens and their vocal harmonies hit the right note. Catherine of Aragon (Jarneia Richard-Noel) is the first to tell her tale, still upset at being cast out in favour of the boastful Anne Boleyn (Millie O’Connell), who loves to remind her fellow queens just how she died. Jane Seymour (Natalie Paris) is up next, slowing things down with her ballad as she reveals she was Henry’s true love and therefore has the saddest story of all, before the audience is introduced to Anne of Cleves (Alexia McIntosh), who knows she’s possibly the luckiest of all six wives.  Katherine Howard (Aimie Atkinson), the second of Henry’s brides to meet with the executioner’s block, is up next and finally it’s the turn of Catherine Parr (Maiya Quansah-Breed), the survivor (“Gold star to Cathy Parr”). It’s girl power all round in fact as the queens are all supported by their “ladies in waiting”, their talented band directed by Katy Richardson.

The musical is well-written and entertaining throughout with the 75 minutes flying by in the blink of an eye and the audience left wanting more. The staging, designed by Emma Bailey, is simple and works well, setting the scene as a pop concert, with a few clever references to the queens thrown in including an imposing throne, as well as a cross for the religious Catherine of Aragon.

Six is witty, hilarious, sassy and empowering with a strong, timely female message – if only all history lessons were as entertaining as this! Step aside Hamilton, Six is here to take its rightful place on the musical throne.

Six is playing at the Arts Theatre until 14th October.