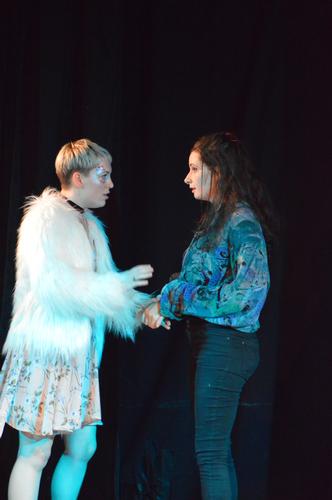 Controlled Chaos UK make a bold move however arguably miss the opportunities that such a progressive interpretation provides.

The contemporary revamp of Shakespeare’s classic loves story is set during the current Pride celebrations and reimagined the star crossed lovers as female homosexuals. Although the mere inclusion of a homosexual couple in Shakespeare’s is undoubtedly empowering for the LGBT community, the play could have easily taken this motif further by making a social commentary on gay marriage or treatment of the LGBT community. However, the revised sexuality of the couple had no impact on the world it surrounded.

The cast unlocked more comedy than usual of such a tragic tale. This was usually well received although one or two of the jokes were poorly timed within the tragedy. Performances involved novel interpretation of the Bard’s beloved characters: Lord Capulet embodied the geezer-like confidence of Danny Dyer and Tybalt (also role reversed) was even more bloodthirsty and almost psychotic than Shakespeare originally dictated.

Overall, the company breathed a new vivacity into the tragic love story but this seemed without purpose or intent.