India, via The Tower 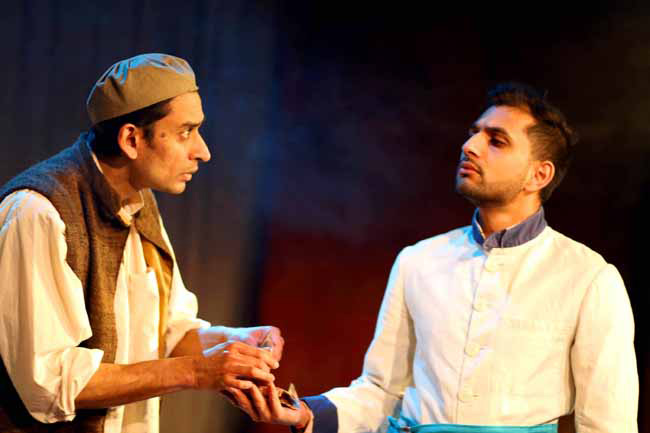 Set in an intimate space, just off of the high street of Stoke Newington, sits The Tower Theatre. Currently in situ is the re-telling of A Passage to India.  The night I attended the venue was at capacity and indeed there were audience members who were sat on the floor in between rows – always a very good sign - and it came to pass that this is well worth a trip to see.

The set is simplistic, but in this piece, that is where the beauty lies.  It allows the diverse and well placed cast to stretch their abilities, the ensemble playing multiple roles including an elephant and rocks. The projection onto the curtain when in the caves set the atmosphere well.

Rahul Singh  is captivating in his role as Aziz.  He moved from wide-eyed wonderment, to desperate confusion and utter dismay in a couple of breaths.  Ably assisting him in Sherman's adaptation is Simon Lee as Cyril Fielding, showing that although there are miles between India and Britain in every sense, it is in fact the distance in the journey that counts.

Mention should be made of Rebecca Allan (Adela Questad) and Alison Linney (Mrs Moore) whose chemistry is tangible and their breaking of the fourth wall very effective. Adela is a complex character and Allan was never at odds to convey that.

Holding everything together and giving a sterling performance is Adnan Kapadia as Professor Godbole; able to convey just the right amount of pride and prejudice when required together with being an expert conduit who went to great lengths to explain what could have perhaps been lost in translation both in terms of language and the fast paced nature at which the piece moved.

Should this production ever make it to the West End it would be delightfully received, I feel.

It runs until 15 February