For the Sake of Argument - Review - Bridewell Theatre 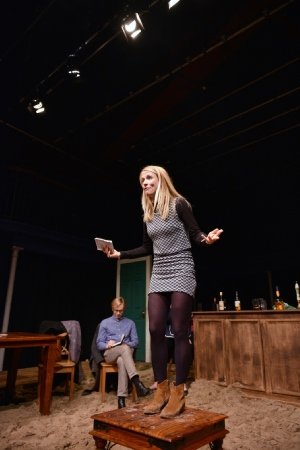 We appear to now be in an age where political theatre is everywhere. It's as if new shows can only be produced if politics are involved. That being said, good political theatre can be incredibly thought-provoking and entertaining in its own right.

Almost every person of a particular generation has an opinion about the 2003 Iraq War. About its legality, about if it was the correct way to counteract the problems arising, about who is ultimately responsible. Harry Darell's 'For the Sake of Argument' delivers these differing opinions at its forefront. And while these controversial opinions have the strength to form good political theatre, it seemed to fall short of the mark.

The characters didn't have any major in-depth development, giving their audience no real need to be sympathetic or share in their emotions.

There wasn't really a major resolution to any of the arguments being given, and pointless injections of comedy into very serious topics served only to prevent the audience getting deeper involved. It must be stressed that this is no fault of the cast, but mainly in the rushed storytelling. The performance was relatively short, and with a few extra carefully written moments of character development, the ending could have made a greater impact.

It appears that the title of this piece has hit the nail on the head. This play is here purely for the sake of an argument, without a resolution.

It runs until 8 February