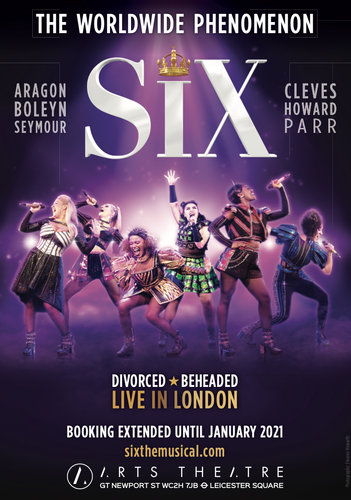 SIX will celebrate its first West End birthday at the Arts Theatre with over 90,000 extra seats going on sale at 2pm on Friday 17 January.

And on Tuesday 21 January, the West End Queendom welcomes a new royal as Sophie Isaacs will wear the crown for the first time as Katherine Howard. Sophie starred as Heather McNamara in the cult West End hit musical ‘Heathers’ and recently was Goldilocks in ‘Goldilocks and the Three Bears at the London Palladium. Her other major musical theatre roles include Annette in the sold-out critically acclaimed European premiere of ‘Cruel Intentions the musical’ at last year’s Fringe, Janet in ‘The Rocky Horror Show’, Frenchy in ‘Grease’, Sandra Beaumont in ‘Made In Dagenham’, Amber Von Tussle in ‘Hairspray’ and Margot in ‘Legally Blonde’.

Book your tickets from £ 27 here