Due to overwhelming demand 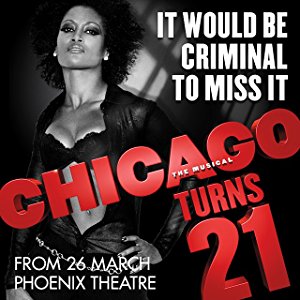 Even before previews have begun, the producers of the Kander & Ebb musical CHICAGO, winner of six Tony Awards, two Olivier Awards and a Grammy, have extended the booking period at the Phoenix Theatre in London until 6 October 2018.  Following a successful UK and international tour, and after a 5½-year absence from London, the musical will open on Wednesday 11 April 2018, following previews from 26 March.

Casting for the new booking period will be announced nearer the time.

CHICAGO originally ran in London for 15 years, making it the West End’s longest running revival.  It first opened at the Adelphi Theatre on 18 November 1997 to rave reviews and immediately became a sell-out hit.  CHICAGO won the 1998 Laurence Olivier Award for 'Outstanding Musical Production' as well as the 1998 Critics Circle Drama Award for 'Best Musical'.  CHICAGO transferred from the Adelphi Theatre to the Cambridge Theatre in April 2006, where it ran for five years until 27 August 2011.  The show then opened at the Garrick Theatre on 7 November 2011, where it ran until 1 September 2012.

Since it opened in New York in 1996, CHICAGO has played in 36 countries worldwide, and been performed in English, Dutch, German, Swedish, Spanish, Portuguese, Russian, Italian, French, Danish, Japanese and Korean.  It has grossed over $1.5 billion worldwide and has played over 32,500 performances worldwide, with an estimated 31 million people around the world having seen CHICAGO