A comedy musical for anyone who’s fallen in, or out, of love 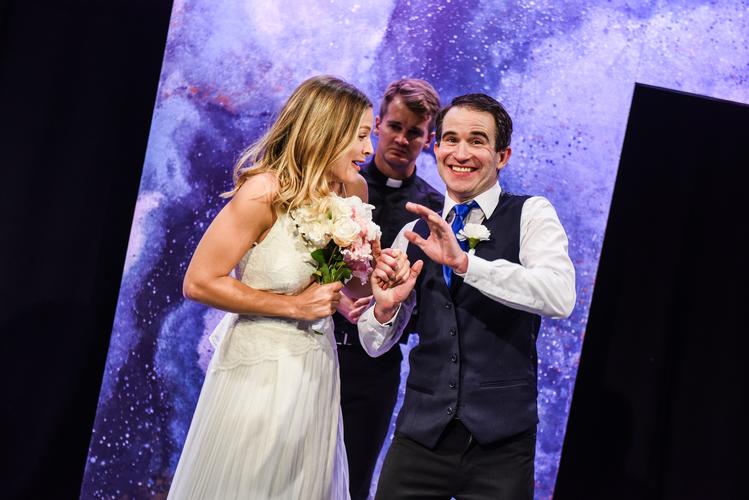 I love you, you're perfect, now change lives up to its name as Chiswick Playhouse give us an extensively re-written 2018 version of an off-Broadway gem that ran for twelve years straight since premiering in 1996.

After a smidge of research, it is definitely confirmed that this UK debut is the better edition as Joe DiPietro (Book and Lyrics) and Jimmy Roberts (Music) have filled their musical with pop-culture references and comprehensive couplings galore.

With no interval, the audience are whisked through a light-hearted libretto for 80 minutes. Bookended by a celestial a capella cantata, episodic scenes of the story of love are performed by the match-made cast of four, George Rae, Dominic Hodgson, Laura Johnson, Naomi Slights in a riotously touching arc from the pitfall-filled culture of hook-up apps to the expectations of marriage to the lasting laboriousness of love.

Directed by Charlotte Westenra and Choreographed Steven Harris transforming between characters and relationships was made to look simple by the ensemble; the cast demonstrate a very comfortable and complimentary complicity. Having fun with accents and characteristics, the images were sometimes both grotesque and iconic in such an intimate space. The stand-out performance however comes from Dominic Hodson: he morphs between stereotypes, ages and attitudes with such ease and knows exactly how to make each caricature nuanced and likeable; an incredible and effective versatility displayed in one presentation.

Joe Dipietro and Jimmy Roberts' score was consistently great fun: clever lyricism, raucous rhymes and each piece had a clear style that always contrasted beautifully with the song that came before. On several occasions, it felt as though each piece did not climax satisfactorily but, with one keyboard as the orchestra (Musical Director, Stuart Pedlar), it is quite hard to be overwhelming. Smiles were plastered on the audience's faces throughout, but only a few melodies lasted after the doors closed. The unique beauty of the show is that the songs are not complete without the performance. Listening to them separately, one yearns to be back in that theatrical space, watching the relationships unfurl before them and that is quite a feat.

An important criticism, however, is that in this book of love, some of the chapters were missing. With such a one-off opportunity to broadcast this arc of love and all its possibilities, you would have thought that there is scope to cover nearly everything. Alas, heartbreak was only touched upon, leaving the playroom for further development, which is exciting further still.

Design (Verity Johnson) and scenic artistry (Charlotte Dennis) were minimal and appropriate. A bare set with astronomical print. Set or props were manipulated by the cast, continuously being brought on and off stage with only a few transitions of "chair-dancing" that lasted a slightly uncomfortable amount of time.
Lighting (Neil Brinkworth) was unnoticeable by which one means it was perfectly functional to give the small cast their moments in the spotlight without being a distraction.

Whether you have seen the original and want to be wowed by how much more a piece like this can develop or you just need to chuckle out how insatiable the human appetite for humiliation and adoration can be, this production will have you constantly smiling and your stomach aching with laughter. Even after all of that, it will slap you with some strong sentiment and tell you it never loved you either. So swipe right on this one, because after all the small talk, it's definitely worth it.