An experimental comedy about the danger of labels 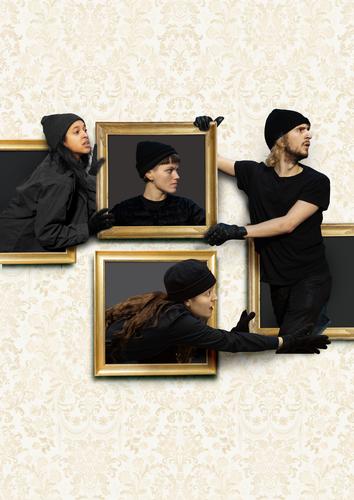 Have you ever had an existential crisis in an art gallery? No? Well never fear, Poltergeist have got that experience covered and they will show you exactly what it looks like too in the comedic crusade that is Art Heist.

We follow the journey and convoluted backstories of three art thieves (Serena Yagoub, Rosa Garland, Will Spence) who have decided to rob the same painting on the same night... or have they? Jack Bradfield's adventurous script whisks the audience away on daring dives off of skyscrapers and lyrical loops through lasers as the devisive character of The Guard (Alice Boyd) omnisciently instructs each thief their next move.
While casually throwing in a gag or ten, the script moves past a funny coincidence and tries to explore or at least offer up some much deeper ruminations about what it means for a painting or a person to be valued.

The set  (Shankho Chaudhuri) is brilliant. Incredibly simplistic but symbolism is buried within it. In this black-box studio space, raked seating looks down at a bright white boxed stage itself, three white plinths on a white floor give the suggestion of a gallery. However, perhaps later in the show, the white frame around the whole set is a little symbolic of the fact that we are sitting here also deciding the value of this piece of theatre as art. The white contrasted with the black of the theatre, where The Guard/God character moves in and out of, asks what is real and what is not. This is where the play gets difficult to read.

Although each character was clearly outlined, they felt like they needed to be coloured in a little brighter. Any audience interaction appeared tentative and the performers lacked presence. Their portrayals seemed too similar and as they battled with the forth wall it became confusing as to whether they were aware of their existence in a play or not. Perhaps a purposeful presentation but it left the need for clarity and comfort unsatiated. The idea was brilliant but, ironically, it felt muddied.

Atmospheric lighting design (Lucy Adams) coloured the set beautifully, creating imagery so that the audience didn't have to work TOO hard in conjuring pressure plates and lasers. Coupled with sound design (Alice Boyd)  that was excellent in regards to following the movements of the thieves and adding effects to their decision-making. The Katie Mitchell-esque contribution of "security" cameras, projected on two screens straddling the stage functioned for a few comedic moments but, other than that, failed to add anything spectacular to the piece and instead just crowded the space.

As a strong comment on value, art and what theatre can say about it, Art Heist needs work. As a frolicsome fringe piece, it's an entertaining night out that may leave you wondering.