A comically gruesome adventure of pirates, monsters and the ingenuity of one small girl. 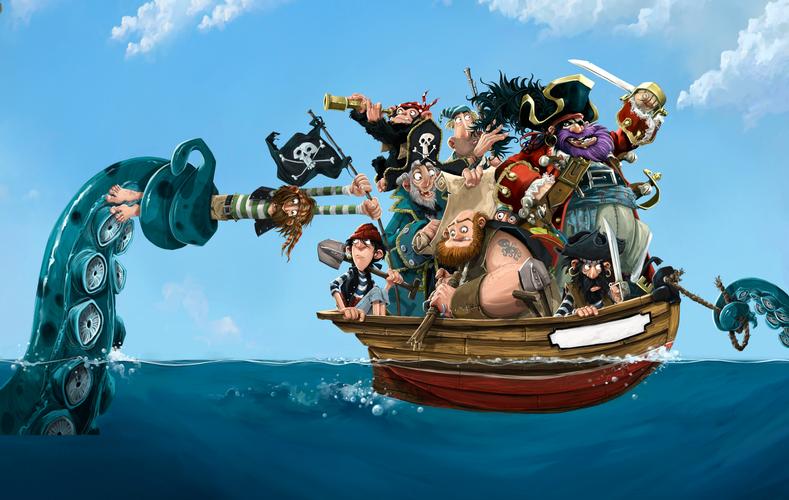 We meet Emily (Martha Seignior)  – she’s only nine years old and runs an inn on her own since her father was killed. She’s having to prepare the venue for some unwanted guests – the pirate, Captain Purplebeard (Oliver Britten) and his dastardly crew (Anna Brook-Mitchell and James Dangerfield). She knows they’re going to guzzle down all the drink and gobble all the food and there’s nothing she can do about it. Or can she?

The intelligent Emily carefully plots her revenge knowing there’s only one thing a pirate really loves – treasure. X might mark the spot but in this case it’s placed randomly on a map sending Captain Purplebeard on a wild goose chase for a chest of goodies that doesn’t even exist. We go along on the adventure too which ends with him being devoured by the tentacles of the Pirate Cruncher, a monster who loves feeding on pirates.

This show is touring around the UK and was on at the Arts Depot in North Finchley. The auditorium was quite big and the cast really used the stage and the aisles to its full capacity, keeping all the children gripped and involved as you see them moving their little heads, left, right and centre.

There’s plenty of audience participation too which includes some sing-alongs. And a kids' show just wouldn’t be complete without the baddie being pelted with something or the other. And for a refreshing surprise, there are even some water guns blasted at the audience.

It’s got everything to keep the young ones entertained and it even manages to generate some laughs from adults too.

And the only way to really test the brilliance of this show was to review it with a child – my little five-year-old niece’s response to what she thought of it at the end was that it was ‘absolutely awesome’. You can’t get a better verdict than that.

The show is part of a tour so click here to find out when and where it’s on.