The Feeling - Review - The Other Palace 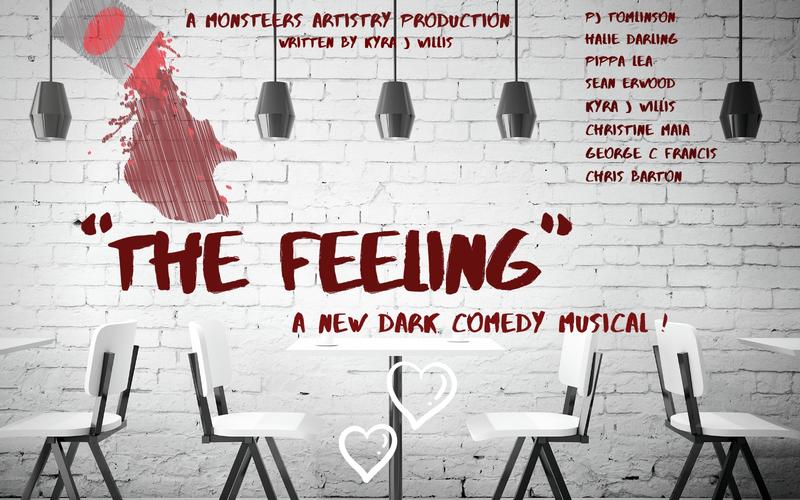 The Other Palace has made a name for itself championing new musicals and offers a space for emerging artists to present their work. This week it’s the turn of The Feeling, a dark tale of toxic friendship written by Kyra Jessica Willis.

Directed by George C. Francis, The Feeling tells the story of a group of six friends, Kasey, Edie, Jess, Lexie, Mel and Archie. Troubled Jess (Kyra Jessica Willis) is having a bad time of late. Having fallen out big time with Edie (Chloe Hazel) over Kasey (PJ Tomlinson), she’s conflicted over her feelings for Holt (Chris Barton), not to mention battling with past demons which are threatening to overwhelm her. Elsewhere newly single Lexie (Pippa Lea) is attracted to Archie (Sean Erwood) but finds herself in a spot of bother; while coffee shop owner Mel (Halie Darling), the calm, peacekeeper amongst the group, finally has a chance for happiness with Jamie (George C. Francis). But as events transpire, the group is further divided, and friendships and relationships are put to the test.

Labelled as a ‘comedy musical,’ this ambitious show is relatable for anyone who’s ever experienced friendship woes (who hasn’t) and features a number of well-known tunes including the likes of Pink’s ‘Who Knew’, Chris Isaac’s ‘Wicked Game’, Roxette’s ‘Listen To Your Heart’ and Kelly Clarkson’s ‘Addicted’. The stripped-back songs are all performed well with talented musical director Connagh Tonkinson at the helm.

While The Feeling promises a lot, at times it doesn’t quite deliver, and with a running time of just under two and a half hours, it could do with a little editing to retain interest, particularly during the second act. It’s evident that a lot of effort has been put into the show however, and with a little work it could be a big success. Although it’s described as a ‘comedy musical’ The Feeling is light on laughs, however fans of angst certainly won’t be left disappointed with the dramatic twists and turns throughout, not to mention a powerful ending.

The cast all put in enthusiastic performances, but George C. Francis stands out as the awkward Jamie, his rendition of Radiohead’s ‘Creep’ one of the show’s highlights. Sean Erwood belts out his songs with gusto, particularly impressing with ‘Losing My Religion’ and it’s impossible not to warm to his character. Pippa Lea brings a soft, vulnerable quality to her performance; while Chloe Hazel plays a brilliant bitch and does a great job with her songs. Despite a few slip-ups, most likely due to opening night nerves, the group performed well together and their characters’ close bond (or not in some cases) was believable.

Featuring a great soundtrack and some promising performances, The Feeling has a lot of potential and boasts some interesting ideas. With some script editing and more character development, it could be great.

The Feeling is playing at The Other Palace Theatre on Saturday 7 September.