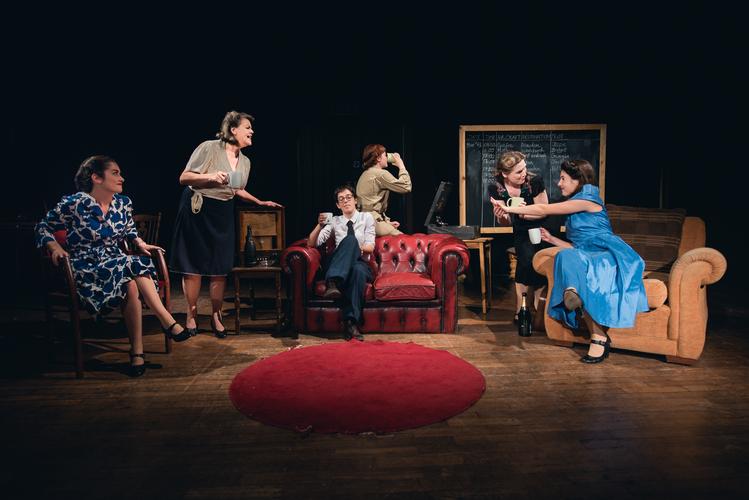 In 1973, the poet Harold Bloom famously wrote about what he called The Anxiety of Influence. The backbone of his theory of poetry, he thought that most new writers, inspired by reading about the greats that had come before, would feel too much pressure to measure up to them and to win their imagined approval. So they would buckle under the strain and end up producing derivative, ephemeral fare, of which the people they idolise would surely not approve.

Spitfire Sisters, the second offering from the writing team of Doc Andersen-Bloomfield, Catherine Comfort and Heather Dunmore, together known as Three of a Kind, is an ambitious work of new writing. Unfortunately, this fictionalised docudrama chronicling the history of the women serving in the Air Transport Auxiliary during World War II is let down by a host of peculiar, questionable creative decisions which keep the production – the earnest and laudable effort of giving women's underappreciated history a sizeable platform and attempting to create something of which their forebears could be proud notwithstanding – from being all that it could be.

Things get off to a promising start with Sound Designer Kerri Chesser's selection of classic Glenn Miller Big Band fare helpfully evoking the wartime spirit of the 40s, and the sparse set design suggesting the interior of the famous White Waltham Airbase, from which the women were deployed to deliver planes to the frontlines; but between lacklustre writing which the committed actors struggle to work with, Adam Hemming's poltroonish direction and short-sighted staging, and Andy Straw's confusing and irritating lighting design, things swiftly deteriorate into an unfocused, plodding bore which it is difficult to like, no matter how much one might want to.

Above all, the distinctly one-dimensional writing, itself likely derivative of Giles Whittell's non-fiction book Spitfire Women of World War II, pervades and tarnishes every other aspect of the production. The play's cast of characters, all of which feel woefully underdeveloped and poorly written, especially in their oftentimes overformal and unrealistic dialogue, seem to be drawn from two historical figures each, leaving them feeling indistinct, and like poor substitutes for far more interesting individual historical figures. Faye Maughan's Phyllis Griggs is clearly set in the mould of women like Rosemary Rees – whose husband urged her to purchase a personal Miles Hawk Major plane to improve her social life - and Pauline Gower – daughter of a high-up Tory MP, who fought for the right to wear trousers. Alessandra Perotto is the bold and brave Typhoon-flying, twice-Severn-Bridge-ducking Ann Wood and the spirited Jackie Cochran – who steadfastly refused to ever allow the British to "put her in her place" - at once, which unfortunately seems to cause her affected Appalachian American accent to constantly slip. Meanwhile, Mary Roubous endearingly combines the physically sickly intellect of Mary de Bunsen with the animal-loving introversion of the Argentine Picture Post pin-up Maureen Dunlop.

Unfortunately, this style of merging two distinct people and personalities together to create a single fictional analogue at best leaves the new characters feeling indistinct and underwritten, and at worst carries a meta-fictional suggestion that these women's real lives and histories can be freely swapped around, tinkered with, and whittled down to useful storytelling props in the pursuit of crafting tiresomely didactic theatre. Their composite lives are unexamined and never fully realised, with the writing disinterested in saying anything more substantial about the significance of 40s-era women's nobility, bravery, courage and sacrifice in wartime service to their country besides sternly finger-wagging at only the most glaringly obvious, almost cartoonish misogyny, and the self-evident economic injustice of a workplace earnings gap, lazily garnished with only the most superficial references to the real, unexamined history.

Indeed, for all the work's promotional bluster about feminism, the writing is full of bizarre and ill-considered contradictions.  In the course of the story – seemingly little more than a rudderless lecture on How Sexism Is Bad, which lacks any distinguishable narrative beginning, middle, or end - one so-called sister hands in her resignation early so she can run off to marry a rich man – naturally the most important priority in a woman's life, never mind standing up to Hitler and the Nazis for her country. It is difficult to imagine that the late, great A.T.A pilot Joan Hughes, of the four-engine flight clearance elite, whom never married lest a man come between her and her love of flying, would approve of such antics.

Later on, a horrifically burned man (Steven Shawcroft's RAF Airman Nigel in a totally unconvincing, obviously rubber face prosthesis)  makes grossly inappropriate pleas to another woman not to risk flying because she's too beautiful, lest a similar accident tarnish her pin-up model good looks (surely the only thing of value that she can contribute to the war effort) and then has his backwards attitude and thoroughly weird, stalky, out-of-nowhere infatuation – frightfully uncharacteristic of real A.T.A men that simply treated the women as respected colleagues -  helpfully validated when she predictably dies in a crash. This despite many real female A.T.A pilots, like Amy Johnson, Audrey Sale-Barker and Joan Page, historically surviving numerous plane crashes and assorted in-flight emergencies, badly injured though they may have been. This way, he gets to feel justified in blaming the other women for her death, and claiming that it proves they don't deserve to be paid properly for their work. Of course.

"Well, there we are, then." one feels lead to think, "That'll teach those uppity women not to do as they're told by men who know better." It's all really rather troubling. This cast of characters seem at times to be a tragic far cry from their real-life inspirations; unlike Joan Hughes, who refused to marry and put paid to sceptical Air Force men, Jackie Sarsour who proclaimed flying "the most natural thing in the world…as though my entire life had led to this moment", Mary de Bunsen taking to the skies explicitly to escape "the ghastly fate of the daughter-in-waiting", Jackie Cochran's life's ambition to be known as "the greatest woman pilot in history", Margaret Duhalde and Ann Wood both fearlessly giving male officers a piece of their mind, or Maureen Dunlop's simple preference for animals over people,  the fictionalised women's excitement seems to peak most of all at the thought of getting to throw parties, wear pretty dresses, and talk about boys. It hardly seems fitting of the real legacy which supposedly inspired them to life.

Yet, instead of the rich storytelling potential of all of this history and legacy, we are left with the shallow, proscriptive writing pressing on the point of contemporary earnings gap concerns, with the stories of our war heroes seemingly being used as little more than an alluring backdrop to hang a portrait of misogyny which manifests in ways so unsophisticated and glaringly obvious that it feels risibly condescending, so much so that it does the far more subtle realities of misogyny itself a disservice in representation. Of course misogyny is real, and doubtless woven deeply into the fabric of our society and culture, sometimes into the very structure and form of language itself – far more deeply, surely, than a few tired, predictable, off-colour remarks of 'but you're only a woman!' in so many drab variations.  That much is – or certainly ought to be - obvious to anybody paying a modicum of attention. Indeed, in Russia, until World War II, one literally could not use terms like 'infantry' or 'machine gunner' or 'tank driver' without explicitly referring to a man. New words had to be invented from scratch just to create space for women in the army, because the very concept was unfathomable. Such is the deplorable breadth and depth of women's oppression, whether in America, Britain, Russia, or anywhere else in the world we live in, be it in the 1940s, or the modern day.

That being said, the first rule of good writing is to avoid telling the audience things they already know.

Matters are not helped by such a culturally, historically, and artistically informed work – uniquely by women, about women's experience, and singularly for women - being left in the hands of a male director, which feels quite simply inappropriate in a great many respects. In practice, Hemming is forced into a grim Scylla and Charybdis scenario of either appearing to appropriate the work of women writers and bossing around a majority-female cast as he pleases, or else, all-too aware of these dreadful optics, being so overcautious and hands-off that he may as well have given up the task altogether. Either way, he is left doomed to such innate incompetence with the material that it really seems that the writing team has been recklessly inconsiderate in ever giving it to him in the first place. One can't help but feel, with the production otherwise so intent on touting the importance of feminism and women's representation, that a female director would surely have been more apt, and certainly far more competent at the task.

Hemming, though, seemingly opts for the latter directing style, and consequently, the play is left feeling too loose, disjointed, and lacking in firm directorial vision to make any positive impression. His cast struggle with a lack of direction or input on their characters, seeming only to read their lines as fast as possible, moments of drama fail to make any impact, and staging decisions are sometimes ridiculously impractical. More than once, actors are positioned so far to stage right that those sitting on the right-hand side in the back literally cannot see them. Meanwhile, Andy Straw's irritatingly confusing lighting too often aims for 'atmospheric low light' and lands in 'too dim to see anything from the back of the room'. Straw and Hemming are also far too fond of total blackouts, rankly abusing them for simple scene transitions to the point of the audience beginning to clap despite the play being far from over. It was of no help to the disjointed feel of the writing and the unconfident direction.

An earnest and experienced cast do their best despite it all, to be sure. Annabel Smith and Chloe Wade, in particular, do an admirable job of delivering characterful monologues which constitute some of the strongest writing in the otherwise weak text. Alas, to paraphrase Hitchcock: "To make a great play, you need three things – the script, the script, and the script."

Spitfire Sisters is a disappointing, forgettable failure in nearly every aspect, crippled by the Anxiety of Influence – but Three of a Kind should not give up their worthy ambitions. Instead, they should and must try again. They must keep writing, keep improving, and keep on championing the cause of recording women's erased history, and not only for themselves. At present, it is grimly true that women, especially those in the public eye – be they actors or writers – are not allowed to fail. Such is the ruthless, cruel, impossible perfection endlessly demanded of them. That this production has failed, given the weight of its own ambition and the daunting shadow of the legacy it exists in, is unsurprising and no-one should be too harshly blamed. Anyone would struggle in those circumstances.

More importantly, this failure is no bad thing. Women, like all people, must be allowed to fail and be given new chances to succeed, just the same as men. Only then we will have any sort of real equality.