Fix up - Review - The Tower Theatre 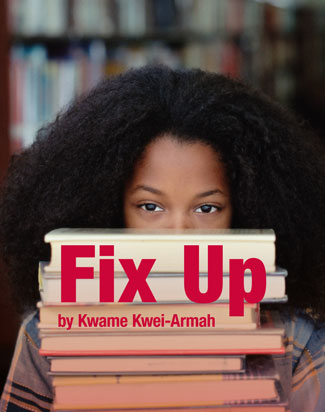 First performed in 2004 at the National Theatre in London, Kwame Kwei-Armah’s powerful drama of black identity, forgotten history, and divided loyalties has had a homecoming of sorts in being newly staged by the Tower Theatre in Stoke Newington. Reborn within Hackney borough, the beating heart of one of London’s most thriving minority communities, proceedings are immediately given a striking metafictional edge.

Fix Up sees its protagonist Brother Kiyi (Richard Bobb-Semple, making his Tower Theatre debut) struggling to keep his titular bookshop, devoted to all manner of black biographical history, from closing down for want of customers. Even whilst his adopted son of sorts, the endearingly hapless Carl (Isiah Bobb-Semple), brings in boxes of new books, it seems that their community is more interested in chasing popular trends and fitting into a predominantly white society than in really connecting with their own uniquely black history and culture. Then, one day, Jasmine Rachelle’s Alice, a young mixed-race woman caught in the midst of both worlds and struggling to find her own meaningful identity, visits the shop, forcing a devastating reckoning with a dark and troubled past as personal as it is political.

Kwei-Armah’s writing has a wonderful strength and dramatic power, his dialogue crackling with the energy and eloquence of lyrical, rapid-fire patois, and given a sharp edge by (viewer be warned) unabashed deployment of the most explicit reclaimed racial term. His writing is brought to life by a hugely talented cast of actors, chief among them Rachelle and the elder Bobb-Semple. Both give moving, powerhouse performances, showing huge range and ability, and doing much to sell the play’s moments of genuinely emotionally devastating impact.

Isiah Bobb-Semple is a pleasure as the complicated Carl, the young man on a journey to articulate and come to terms with personal and political history, with Isiah moving deftly from the vivacious, youthful energy of his affected happy-go-lucky demeanour to the much more sombre notes of a grim past Carl still struggles with, and making it all believable as he goes. Meanwhile, Valerie Paul’s seemingly larger-than-life, no-nonsense Norma has an infectious energy and boldness about her, deftly commanding every scene she’s in, and Kieron Mieres skilfully rounds off the cast with an enjoyable, confident take on the hypocritical Kwesi, the shop’s wannabe Malcolm X in-residence, suspiciously more interested in capitalism than radicalism. All the cast pull off the work’s variety of complex, deeply flawed characters with aplomb and, in all the best moments of powerful human drama and tragedy, are wonderful to watch.

Supporting the cast is the stand-out work of the creative team, chief amongst them Holly Spice,         whose ingenious set design frames the dilapidated Fix Up bookshop as a microcosmic distillation of the running theme of the foundation of black historical knowledge itself withering away and languishing in distinctly outmoded ‘uncool’ surroundings, whilst the faces of great black thinkers look on from their portraits in the background, their legacies of thought and action haunting the present of black life.

Phillip Ley’s sound design together with Sarah Assaf’s musical arrangement compliments this visual storytelling wonderfully, with a soundscape evocative of neglected black history that centres Marcus Garvey’s surviving words of righteous anger and indignation as they repeatedly puncture through the listless mundanity of the day-to-day, demanding an audience that will listen and take notice. Nick Insley’s lighting lends a beautifully solemn, portrait-like pathos to some moving, emotive monologues from the leads and heightens all the most shocking moments. Kwei-Armah’s lyrical patois, meanwhile, is brought out nicely by dialect coach Peta Barker.

Although events do build to a compelling, energetic and emotionally devastating finale in the second half, this leaves the first half, by comparison, seeming slowed down and slightly lacking in the same energy and momentum, with some of the longer pauses unfortunately suggesting delayed cues rather than dramatic effect, though this can easily be remedied in the coming performances. Nevertheless, director Landé Belo, in her Tower Theatre directorial debut, has accomplished quite a feat of storytelling, bringing a clear and confident vision to the text and creating work which is a richly thought-provoking and powerful pleasure to watch.