On your feet - Review - London Coliseum

There is no way you can sit still with this one 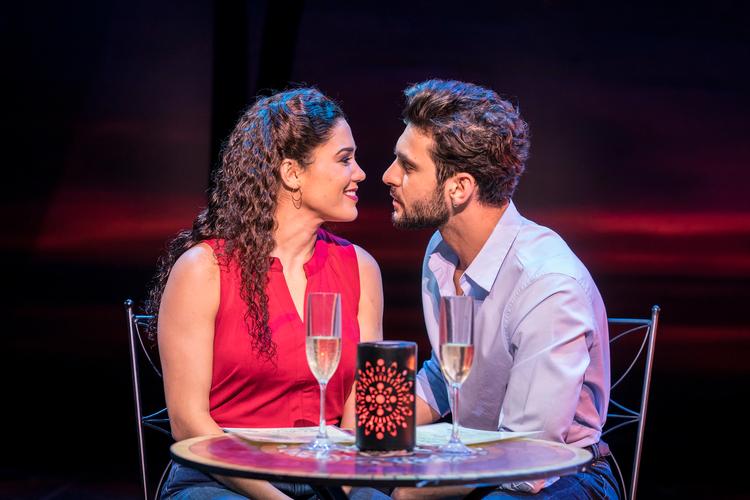 On your feet is a jukebox musical built around the life and career of Cuban-American superstar Gloria Estefan.  It is directed by Jerry Mitchell with choreography by Sergio Trujillo and book by Academy Award winner Alexander Dinelaris.

Gloria's journey to becoming one of the biggest Latin American pop stars began in 1959, when her family fled Cuba for Miami. She met Emilio Estefan in 1975; the two married in 1978.

In 1985, the Miami Sound Machine (Emilio’s band) exploded onto the popular music scene with the Latin crossover hit "Conga," that transformed Gloria Estefan into an international superstar. Since then, Gloria Estefan has had one of the longest and most successful careers of any contemporary pop star, and she has done it in two languages: Spanish and English.

In March 1990 Gloria was in a bus accident that left her paralysed at the height of her career. Her recovery was commemorated by the gospel-tinged 1991 single Coming Out of the Dark.

The story flows very well and there are no dull moments in the show which has amazing energy as the main ingredient. The cast dance and sing flawlessly and before the end of the first act, the audience gets up and dances too. Believe me: even if you are not a fan of Gloria, there is no way you can sit still.

Christie Prades and George Ioannides who play Gloria and Emilio are a joy to watch (and hear). Great performances from Madalena Alberto as Gloria Fajardo, Karen Mann as Consuelo, Elia Lo Tauro as Gloria's ex-military father and all the ensemble.

The beautiful costumes of Emilio Sosa and the vibrant lighting by Kenneth Posner give even more that feeling of "contagious party" to the show.

The story of Gloria and Emilio assimilating to American society and amalgamating their Cuban culture also comes at a poignant time with the current immigration issues in the real world.

On your feet tells a story of dream, luck, perseverance, fate, success, sadness, loss, and strength. And it tells us this story through beautiful music and dancing. Thanks, Gloria, for bringing one of the best shows of the summer to the West End!