It's summer in Waterloo 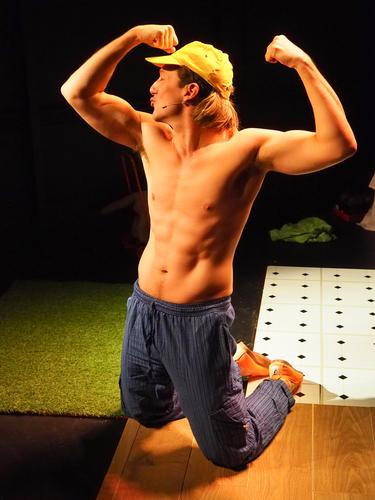 Remember the days you used to watch Neighbours and Home and Away and you felt like they were really part of your life even though they were on the other side of the world? You're in for a treat you beauties because you can relive those moments for a night watching Summer Street: The Hilarious Aussie Soap Opera Musical.

The fun encompasses two of the biggest real soaps from down under and all of a sudden you find yourself in make-belief Hudson Bay. In super quick scenes kicking off the performance you're taken back in time to see how some of the best-loved characters of Summer Street were killed off. Strewth, the people of Hudson Bay really have suffered – a tsunami, a plane crash, an earthquake – you catch my drift.

And then fast forward to the present day and we're reintroduced to them and their pitiful lives since the fame and fortune disappeared. But they're given a chance to appear in a reunion show…Deadset.

The obvious parallels are there – Dr Marl instead of the famous Dr Karl, Mrs Mingle who is just as nosy as Mrs Mangle, Brock who is ripped like surfer Brad, and Bobbi the tomboy in overalls just like Charlene. There's even a special canine appearance – remember Bouncer the dog? Crikey - Well, it's Pogo for the all singing all dancing Summer Street  – a stuffed version perched in its own trolley, ready to be wheeled around on set - viewers tuning in for the live reunion show will never notice he's not real!

There's a nice little plot twist –  the clues can be easily missed but when it's spelt out for you towards the end you're left thinking you're a flaming galah and really should have figured it out.

The accents slipped a few times, high notes were missed at points, but this was a preview show, so everything can be worked out.

My only criticism would be that the characters needed to be distinguished a bit more with their costumes. The stand out example was Mrs Mingle. In one scene she would be the older nosy neighbour and the next she's Marlene, a young love interest of another character, but with no changes to her appearance. Then again the scenes move fast so perhaps it would be difficult to do.

There were lots of chuckles and even a cute tribute to Kylie which made you want to stand up and emulate the moves being performed on stage…Fair Dinkum.

Summer Street: The Hilarious Aussie Soap Opera Musical was a fun throwback and is on until 2 June. Bonza.