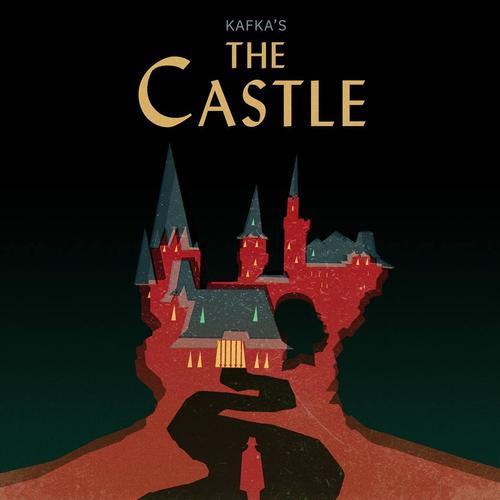 Old Dog Theatre's aim is to base this company into bringing to the stage old forgotten writings by reinventing the pieces with adding puppetry and movement. Their aim is to try to breathe new life into the works and reintroduce them to a new generation of audiences.
When their latest production of Kafka's The Castle met the BBC surreal comedy A League of Gentlemen or so it seems, strange things starts to play out on stage. The stranger arrives within The Castle surroundings to the local's vocal hostility and suspicion. You can almost hear the words"you are not from around here, are you?" being screamed across the stage.

The puppet that the cast operate is a nice effect as it's another visual part that is not often used in plays and it breaks up the stage performance. The well-rehearsed scenes with it depict the journey our stranger has taken to reach the area and then to when he leaves. Even though you can see it being moved by the actors it doesn't take anything away from the role it is meant to play.

The main comedic parts of this play are performed by the very talented Marcus Tischhauser. His body language is superb as he mocks the stranger with sarcasm and irony. His one-liners created a lot of laughter within the audience.
The set props are predominantly boxes and suitcases. Anything more would have cluttered the small stage and detracted from the actors. However, the revolving door in the form of a wooden frame is a brilliant idea as it breaks the scenes up as the stranger passes through it to indicate he has travelled to another part of the village. Simple yet extremely effective.

Director Trevor White has created an extremely funny and entertaining hour long performance based on the play from one of the lesser known works by Franz Kafka. With some minor editing, this work will be ready to make its debut at the Edinburgh Fringe in August.

As with the nature of Kafkaesque work when the fusion of realism and fantasy merge there isn't a clear ending to the play or neatly wrapped up happy ever after. With a play such as this one, it's unlikely that a happy conclusion would ever be obtainable or was Kafka's intention.