Based on the diaries of Tony Benn 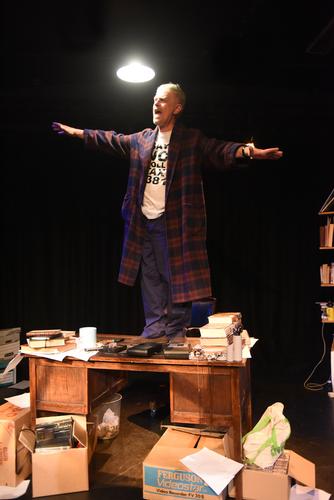 Tony Benn has been recording his life on a tape every day, for decades. But this tape will be the last one.

A 75-minute monologue has the potential of feeling excruciating long and unnecessary; especially when about politics from one or two decades ago. But Philip Bretherton’s fantastic interpretation of the renown and controversial British politician guarantees a whole different experience. Written by Andy Barrett, Tony Benin’s Last Tape is entertaining, poignant and funny. The director, Giles Croft, skilfully turns every-day-life events (such as replacing a light bulb) into ways of giving rhythm to the narration, as well as insights into the eventful life of a feisty and committed man at the end of his journey.
An aged, disillusioned Tony fiddles with objects out of his drawers, while holding his pipe with trembling hands. His mind plays with the idea of the next speech he’ll give at a funeral. “There’s nothing worse than repeating yourself at a funeral”.
Should he say one more joke? Should he fight one more battle? Maybe just one more...
Arm yourself with knowledge of and interest in British political figures in order to fully enjoy this clever play.